A History of CMM’s 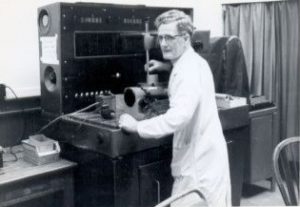 With so many advancements in metrology and dimensional measurement in manufacturing, I thought it might be interesting to take a look at the history of the technology to see how we’ve gotten to where we are today.

Before We Start – What is a CMM?

A CMM, or coordinate measuring machine, is a device used for measuring the physical geometrical characteristics of an object.    Basically, a CMM leverages a probe to acquire multiple points on a workpiece surface and map their X, Y and Z coordinates for measurement.   In general, a CMM provides precise 3D measurements of parts for design, inspection, profiling and reverse engineering.

A History of Coordinate Measurement Machines…

1500’s – René Descartes
The concept of multiple axis measurement originated several centuries ago with René Descartes,  a French philosopher, mathematician, and scientist.   It was his passion for mathematics that led to his development of Cartesian or analytic geometry, which uses algebra to describe geometry. Descartes “invented the convention of representing unknowns in equations by x, y, and z, and knowns by a, b, and c”. His Cartesian Coordinate System serves as the basis for CMM measurement today.

1795 – Metrics
Introduced by the French Revolutionary government, the metric system was developed to establish consistent measurement guidelines in a continent that boasted several thousands. The meter became the reference point, and was defined as one ten millionth of the distance between the North Pole and the Equator crossing through Paris.

1840 – Photogrammetry
Photogrammetry is simply the use of photography in surveying and mapping to measure distances between objects. Also originating in France, Francois Arago created triangulation technology that enabled him to determine the position of objects in space based on photographs taken from different viewing angles, without knowing the position of the shots beforehand. Originally used for topography mapping and surveying, photogrammetry has a key role in engineering measurement today.

1848 – System Palmer
Yet another French inventor, J Palmer invented the first micrometer, which serves as the basis for most micrometer design today.

1887 – Michelson Interferometer
American Physicist Albert A. Michelson thought detection of motion through ether might be measurable. The instrument he invented to test this theory is known as the interferometer. In testing his theory, he proved there is no earth motion ether, changing the foundation of physics and leading to Albert Einstein’s theory of relativity in 1905. (Whoa!)

1980 – Portable CMM
Rather than bringing production parts to the CMM, portfolio metrology tools could now go to the production parts. While portable CMM’s remained sensitive to vibrations and instabilities from regular movement, they provided a degree of streamlining to the overall quality inspection process in manufacturing environments.

1985 – 3D Scanner
3D Scanners first appeared in the 1960’s, but once laser technology was applied in the 80’s, dimensional measurements were taken using white light, lasers and shadowing to capture a given surface.

2000 – Optical Portable CMM
Optical portable CMM’s deliver the flexibility and effectiveness of a CMM in a portable format. They are insensitive to vibrations, and can be integrated into the inspection process, making them perfect for manufacturing environments.

Component Engineering is proud to be a sister company with TruPosition Probes, an industry recognized family of digital and analog probes designed to complement today’s CMM solutions in capturing variable data on hole location simply, consistently and accurately. We’re always looking for enhancements to our probe offer to better complement the evolution of CMM’s. We’re pleased to be a recognized part of the future and present of CMM and metrology – and we’re excited to evolve with the industry to be a recognized part of the future.

To learn more about our Probes and Fixture Components, visit our website or contact us.
Come back for our next blog post, highlighting key trends we saw at this years Advanced Manufacturing Expo, and what the experts see as the future of CMM’s.